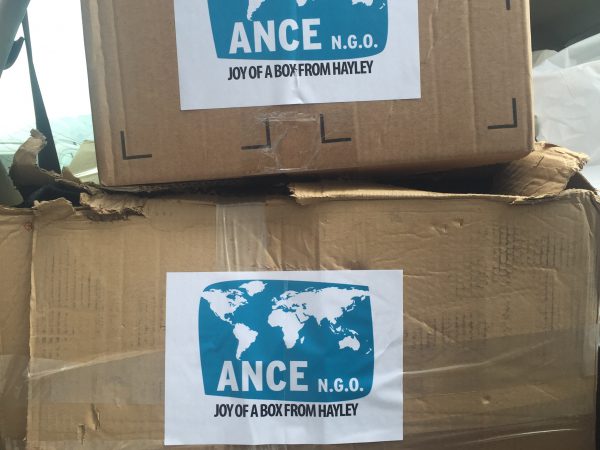 «Joy of a Box from Hayley» started out as an initiative from a mother of students in a German school in England, named Joelle Sprung (also known as Minou). Minou and her children were often talking about people who have to leave behind their family, their friends and their home because their country is at war. So they made a list of things that could be useful to people that actually have nothing in life. An e-mail was send, on her initiative, to her children’s classmates’ parents, trying to raise awareness regarding the situation of the refuges. That’s when they heard about the Joy of a Box, which was organized by a young girl named Halley and that is how the thought took shape and became a beautiful act. They chose to send help to Greece and therefore items of everyday use, personal hygiene items, clothes, toys etc where collected and delivered to ANCE. ANCE delivered the items things to the refugee reception center at Elliniko on the 17th of March 2016. So the boxes of joy arrived at their final destination, the refugees.

Many people and companies helped in the collection and transfer of the items from England to Greece, guided exclusively by their sensitivity and feelings of solidarity.

KE2 culture specialist (Cat II) for the project: Elaboration of a strategy for a stronger engagement of the EU in the culture sector in Mozambique (Deadline: 14th June 2021)

Team Leader and culture specialist (Cat I) for the project: Elaboration of a strategy for a stronger engagement of the EU in the culture sector in Mozambique (Deadline: 14th June 2021)